Below is a chronology of events involved in the Wrongful Eviction against Sacred Stone Camp Water Protectors:

Interview with LaDonna Brave Bull Allard by Toni Cervantes:
https://www.facebook.com/toni.cervantes.35/videos/10209715999228981/?pnref=story
William Jerome:  “After our security meeting this evening I sat down with LaDonna Tamakawastewin Allard to get a better understanding of today’s events. I felt that what she shared with me needed to be shared with you all so we decided to make this quick vid update.“

WE ARE THE PEOPLE tv:  (see video below) “BREAKING: Tribal Council Votes to Evict NoDAPL Camp, Use Donated Funds to Pay Off Debt; In an astonishingly abrupt move, the Standing Rock Sioux Tribe Council went rogue and voted to shut down the Camp of the Sacred Stones  — the original encampment set up by Indigenous youth — and to apply all funds donated in support of the camps to pay off the tribe’s debts.

As LaDonna Brave Bull Allard — head of what has become known as Sacred Stone and owner of the property on which it sits — said in a statement at the council meeting today in sharp protest of the motions,
“This is supposed to be the time of prayer and gathering of the people to stand for the water as we fight for our water and against this billion dollar company Dakota Access Pipeline. This is the time for our nation to heal together and develop relationships with our nations and allies.

Standing Rock Tribe Chairman Dave Archambault II claimed in the meeting the camps have “rampant health and hygiene issues “and “must be shut down”.

“We’re not sitting around taking donations,” Archambault stated, addressing rumors he and other leaders had simply taken donation money for themselves, “but when it comes to the tribe, this council is accountable and responsible for the members it represents — fiscally responsible.  So, we’ve always been transparent, whenever resources come to the tribe.”

LaDonna continued:  “By July, the call was made out for people to come help Standing Rock with the fight against Dakota Access. Thousands of people came out. The SRST tribe then started with supplies and help at the new camp. The tribe slowly removed all fund or help with Sacred Stone Camp which was okay, we paid for our own porta potties and garbage.”

She added Sacred Stone had hired CPAs to manage donations, set up non-profit status for the camp, and kept track of all receipts from purchases made for winterizing and other purposes.  But, as LaDonna added, “Sacred Stone continued to develop for the long term, getting ready for winter by and getting the camp prepared as we were left out of support from the tribe and the other camps, which was ok.”

Now, two council members under Archambault’s guidance, have proposed a tragic end to the oldest camp in Standing Rock — and the complete removal of all water protectors who have called the site home — some of them since opposition to Dakota Access began.

Indeed, some water protectors gave up their lives to support opposition to Dakota Access — leaving behind jobs, friends, and, in some cases, families for months at a time. Many intended to stay for the duration — until the construction is halted.

Many well-meaning outsiders have also been at least somewhat betrayed, as they would have assumed monetary contributions given in support of the camps would be applied exactly to that — not to the Standing Rock Tribe to do with as it pleased.

So, this sudden move — although not entirely unexpected — sends a shock to the heart of hundreds encamped at Sacred Stone and thousands more enduring the bitter and relentless North Dakota winter in several camps nearby.

Archambault previously (Dec. 5th, 2016) used the cover of a delay imposed by the U.S. Army Corps of Engineers to declare, falsely, a victory over Dakota Access and attempted to effect a mass evacuation of water protectors.  After that announcement, the atmosphere became noticeably hostile at Standing Rock, as leaders seemed to both worry for campers’ safety in the subzero temperatures — and resent their massive presence.
Summarizing, LaDonna stated, “In the meantime, the resistance to Dakota Access Pipeline was being in the forefront in media and the news. The violence of Dakota Access and Morton County was escalating to major injuries, arrests and attacks.  We watched as the world watched as Amnesty International, ACLU, United Nations all came to record what was happening on the ground.  We are here standing for the waters, many wholly unsupported except by the donations which were sent, meanwhile #DAPLDave has likely embezzled millions in cash as witnessed by many who helped in the donations tent at Oceti Oyate.  We set aside comfort and ease, many walked away from family, jobs and retirement to join in a stand for Earth“

Shaun King:  “LaDonna Brave Bull live at Sacred Stone as Oceti & Rosebud raids continue.”  She speaks about how in this winter weather it is impossible to relocate camps, & how the camps are being served “impossibilities“, but that Water Protectors are “complying the best they can“.  LaDonna urges people to “call the Army Corps & request they extend the deadline for camps to move”.

Johnny Dangers:  “Yurt Village is 100% clear. US Army should NOT Need to enter Sacred Stone Camp“

Water Protectors issue 20 page Petition/Response Letter to BIA and Tribal Council re: the “NOTICE OF TRESPASS”, thus demanding “30 Day Notice” instead of otherwise Unlawful Eviction; includes “List of Reasonable Demands“ to help the tribe’s case & benefit all of humanity.

Download the PDF:  20 page Petition/Response Letter to BIA and Tribal Council re: the “NOTICE OF TRESPASS”, thus demanding “30 Day Notice” instead of otherwise Unlawful Eviction; includes “List of Reasonable Demands”

“I checked out the new front lines today. The BIA with elements of the national guard have taken Rosebud. They set up a new checkpoint in front of the bridge over the Cannon Ball river and have set up a line at the beginning of the foot path to Sacred Stone as well. As I feared none of the structures from Oceti Oyate remain. It seems all trace this movement occurred are to be wiped from the land. I talked to water protectors still diligently cleaning the areas of the flood plain closest to the BIA line. Despite the risk of eminent arrest they seemed happy with their work. I’m afraid the federal governments going to keep advancing until all the camps are destroyed. After all they can’t afford to let any symbol of resistance flourish. Look at all the problems this movement has caused them so far.“

Wild Willpower PAC:  Photo uploaded from inside Sacred Stone’s schoolhouse, with following message attached:      “Been coaching Sacred Stone Water Protectors to prepare for tomorrow- restitution not retribution. Wrote this on the board in the schoolhouse and Love Kitchen. Informing many people, collecting petition signatures. Preparing. 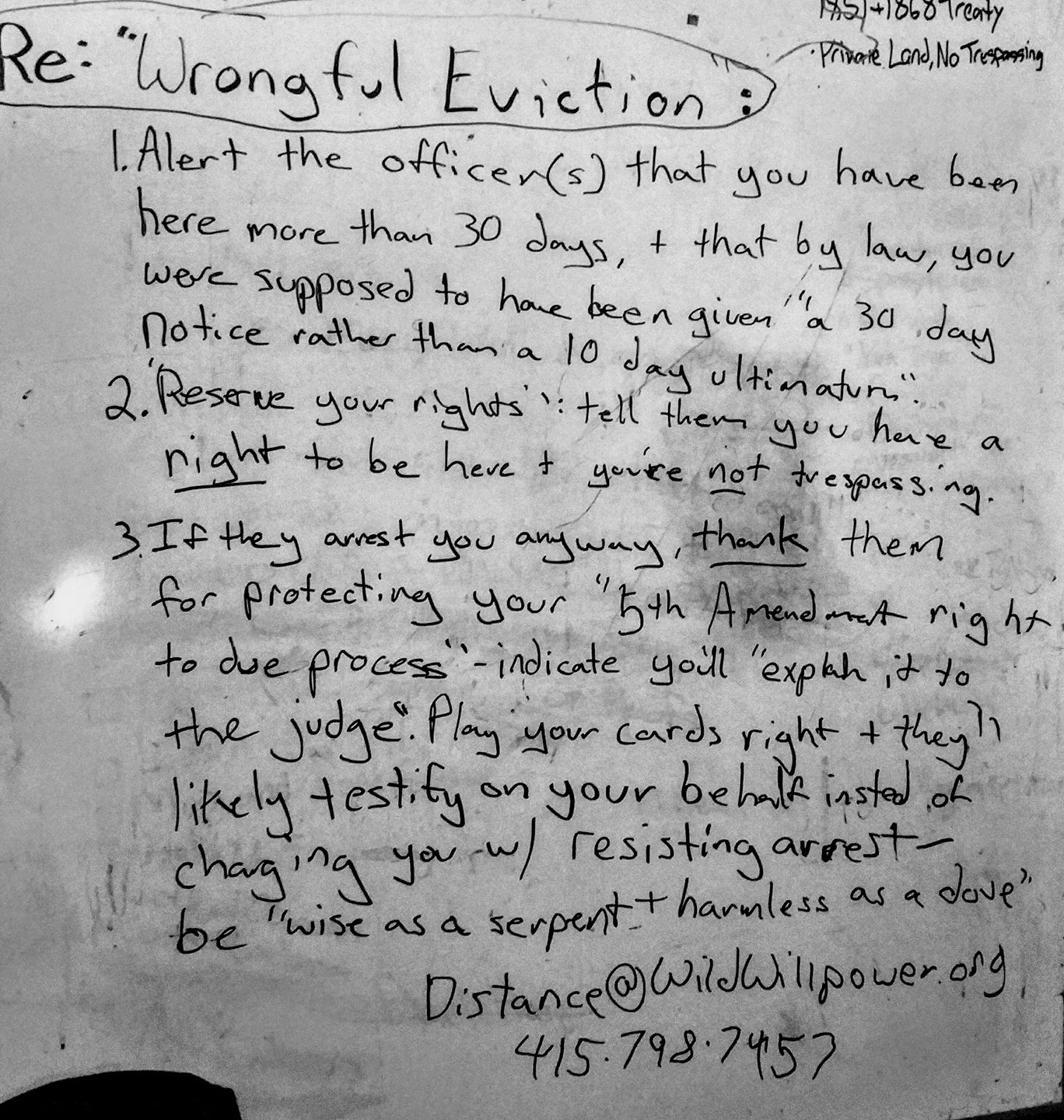 Digital Smoke Signals:  “Update from Sacred Stone, BIA coming through camp to do an assessment “NOT” arrest anyone or harass. This will determine if BIA will come through.“

Inspire Bank Exits:  “Were approaching bia baricade and park rangers have just come into sacred stone. We’re trying to get Jamison out the last guy on the roof per request of his mom.“

Digital Smoke Signals:  “On February 28th, Sacred Stone was expecting to be evacuated by noon according to the notice served by the BIA a few days prior. The camp worked through the night, taking down structures and cleaning up the land. After a long night of work, Myron called the number listed on the eviction notice and began searching for the person who could grant the camp an extension. Thankfully, the BIA allowed members to stay and continue working as long as they saw progress was being made.”  (this video became broadcast March 2nd)

Johnny Dangers explores Sacred Stone Camp after officers “assess” the camp:  “At least 2 BIA drove around camp with looking around Sacred Stone Camp checking on the tremendous progress on moving over the past 24 hours. Camp needs more time. 3 US Army Core and 1 Governors office representative walked around back camp to decide where Army Core property line land is.“

Myron passes through the soft check point at night:

Myron Dewey of Digital Smoke Signals: “Morning update, Notice of eviction from Prairie Nights Casino;  ALL ROOMS HAVE BEEN ALL BOOKED OUT TODAY…“

Myron Dewey of Digital Smoke Signals passes through a BIA “soft barricade”, then drives on to Sacred Stone Camp to discover a “CAMP CLOSED” now in front of the camp.

Winter Vojta:  “Feds book all rooms to push us out“, Water Protectors discuss the forced removal of camps, then walk around the casino showing how the hotel is packed with officers.

(as linked at the bottom of the above photo):

Digital Smoke Signals:  “Spoke with the owner of the home…he assured us he has everything documented there.“

April 1, 2017 – 1 Year Anniversary of the Sacred Stone Camp at #StandingRock.

Celebrating One Year of Togetherness & Standing for the Water at Sacred Stone.

3. Step-by-Step:  What to Do If You Suffered Loss as a Result of Being Wrongfully Evicted from Sacred Stone Camp

Feel free to contact Distance@WildWillpower.org (use all caps in the subject line to get my attention), & please check out the home page of this website & also our parent organization, www.WIldWillpower.org.