9-8-2016:  Governor Dairymple’s Press Conference, requesting National Guard presence.  He also sends a message to Water Protectors regarding conduct, “Do so in a respectful & lawful way.  Resist any pressure to violate the law and tarnish your message.  To all North Dakotans, respect the rights of others.  We all have the right to have our voices heard.“  (video length 27:52):

“The Corps of Engineers is concerned for the safety of all the people involved with the continued demonstrations occurring in and around Corps-managed federal public lands in the State of North Dakota,” said Army Corps Colonel John W. Henderson, commander and district engineer of the Omaha District in on November 9. “In an effort to defuse these tensions, which have led to confrontations between demonstrators and law enforcement personnel, we asked Dakota Access Pipeline on November 4 to honor the Administration’s request for a voluntary shutdown by stopping work for a 30-day period to allow for de-escalation. Dakota Access did not agree to this request.” 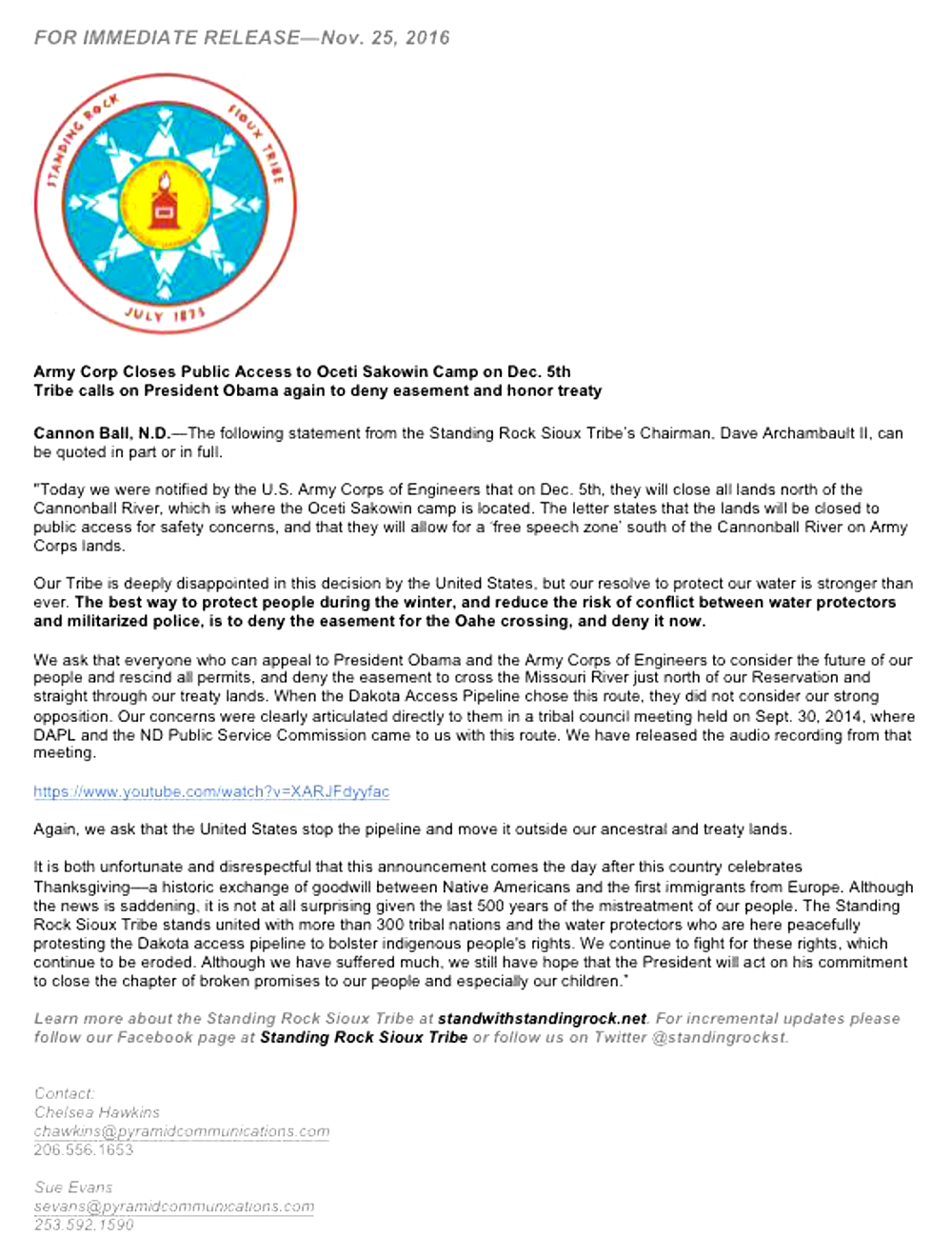 12-2-2016:  US Army Statement- intent to halt DAPL until further review of decision to drill under Lake Oahe (official link)

12-4-2016:  Statement by Attorney General Loretta E. Lynch Regarding the Army’s Decision on the Dakota Access Pipeline

1-18-2017:  Notice of Intent To Prepare an Environmental Impact Statement in Connection With Dakota Access, LLC’s Request for an Easement To Cross Lake Oahe

1-24-2017:  Donald Trump issues Presidential Memorandum Re: “Intent to Construct DAPL” as it is in the National Interest

2-17-2017:  FINAL NOTICE OF TRESPASS Given to All Water Protectors Entering Sacred Stone via the Officer Checkpoint

Sacred Stone Camp:  Press Release “Our Perspective as to what happened this past month at Sacred Stone“:

“Sacred Stone
Press Release
March 19, 2017
The Sacred Stone Camp would like to offer our perspective as to what happened throughout this past month at Sacred Stone Camp. Sacred Stone Camp was first created April 1, 2016 on the confluence between the Cannon Ball and Missouri River with the help of Cheyenne River Reservation members who were the first people to camp on the Brave Bull allotment to stand in prayer and ceremony, and to begin “educating the world”
We received a notice to “Remove Trespassers on Tribal Trust Land” by order of the Chairman and the Standing Rock Sioux Tribe according to the Bureau of Indians Affairs officers who hand delivered the notice on February 15, 2016. This notice was delivered to LaDonna at Prairie Knights Casino. I was told we had ten days to respond to the order by the BIA. Then officers went to the camp and gave a similar notice to the camp members. We gathered the people at Sacred Stone and together made the decision to leave peacefully and in prayer. We immediately began removing the camps, beginning with “Yurt Village” (section of Sacred Stone) we removed peoples’ homes and cleaned up the land. The BIA officers told us that if we continued moving the camp-they would not come in and raid us. We had crews working 24/7 to get people moved out as soon as possible because of the timeline we were given. We were forced to move in the middle of winter with many of our tipi poles and tent poles frozen into the ground. This reminds me of the government issuing an order in the middle of the winter demanding the tribe to come onto the reservations by January 1, 1876. The idea of moving in the winter was inhumane- especially with children and elders involved. Where was the compassion for the people?
In response to the order of trespassing, I visited with the BIA Superintendent Sheila White Mountain and her assistant Dwight on February 23, 2017. I gave her a letter of response which included concerns regarding the nature of the order. She told me to rewrite it and to put three items in the letter: 1. that “this is an appeal.” 2. there was a Tribal Resolution to support Sacred Stone issued by the Tribal Council, and 3. that we are in the process of developing a cultural camp. I returned home to write the appeal, and turned it in the same day. The concern that they were told by the Chairman of the Standing Rock Sioux Tribe was that “we did not have tribal permission to start the camp.”
I informed them that the Standing Rock Sioux Tribe voted to pass a resolution to support the camp on June 8, 2016. I wrote about how we had been working to develop Sacred Stone into a cultural camp. When I turned in the paper they said they had ten days to respond to the letter I submitted. We did our best to follow the BIA’s orders to get camp moved- and most importantly and to keep people safe. We stated that it is hard to move in the middle of winter and after 11 months of thousands of people living the area to be given 10 days to move a whole camp. We were told that if we were actively moving they would not come in to raid or attack the people. So, we moved but we also had to deal with the weather, bad roads it was almost impossible to move everything in the time frame that was given by the Standing Rock Sioux Tribe. Then things changed and we were not sure why because we were following the orders of the BIA police. Next, they put up what they called a “soft blockade” by orders, we were told, from the Chairman of the Standing Rock Sioux Tribe. The police were not allowing the water protectors to bring in supplies, food or water to the camp.
We talked them into allowing 5 gallons of water for 100 people in a day, because we had children and elders in the camps. While we waited for the response from the BIA to our appeal, the police moved in. Everyone was working to get out camp supplies and their personal property with no sleep for more than 48 hours, working in shifts to get things moved in all the mud and everything frozen to the ground and so much to move. Many felt very scared because the “notice of trespass” that was issued threatened that they could “seize, sell, or dispose” of peoples’ personal property” and arrest. Soon, while still moving supplies out we were notified that officers would be moving to a “hard blockade” at noon the next day. Instead, the hard blockade went in to effect at 10 am, 2 hours before the stated deadline despite the Water Protectors fulfilling the mandate to “keep moving”. Many people thought they could get one more trip before they refused to let them back in, so they left their clothes for the last load because they were helping others. We have people who could not get their personal items and had to leave with the clothes on their backs.
On Saturday March 18, 2017, Sacred Stone Camp would like the world to know that WE STILL STAND in prayer for the water, and for our shared future as a species. However, we still have 100% of our compassion for the planet and all forms of life living here. Sacred Stone is still strong, supportive, and will continue to stand in prayer and today stand with the world. The Sacred Stone community is still focused on the mission of building a green energy culture camp for the community and the youth. We stand for the Water, the Land, and all future generations. It is our pleasure to witness the growth and expansion of this worldwide movement as the spirit of Sacred Stone spreads across the planet through the hearts and hands of the Water Protectors. We Stand! Mni Wiconi.“
Press Release #2: