On Thursday, October 15th, 2016, she was arrested alongside 9 other Water Protectors who near the intersections of Highway 6 and County Road 135:

Click any of the photos throughout this webpage to enlarge. 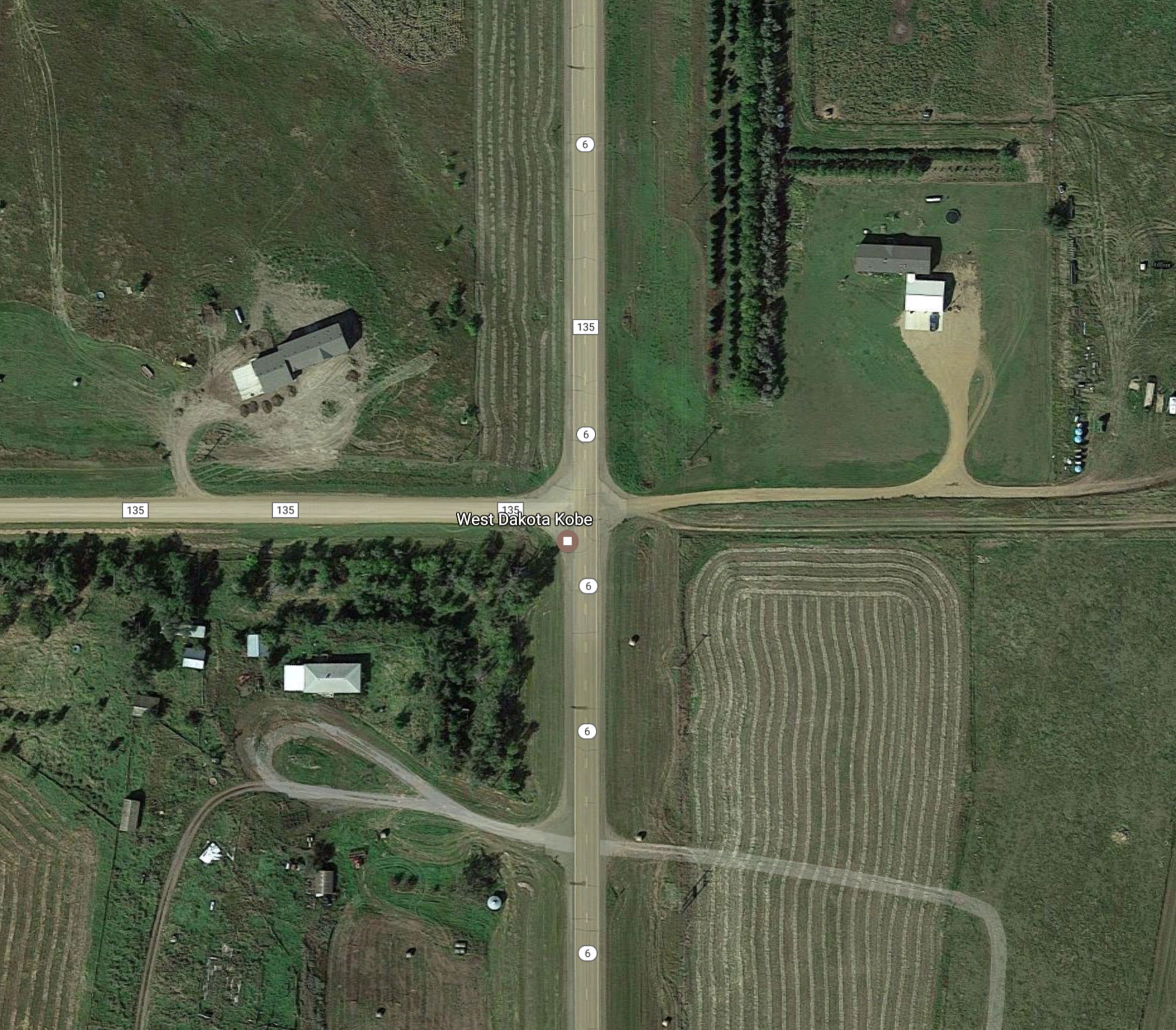 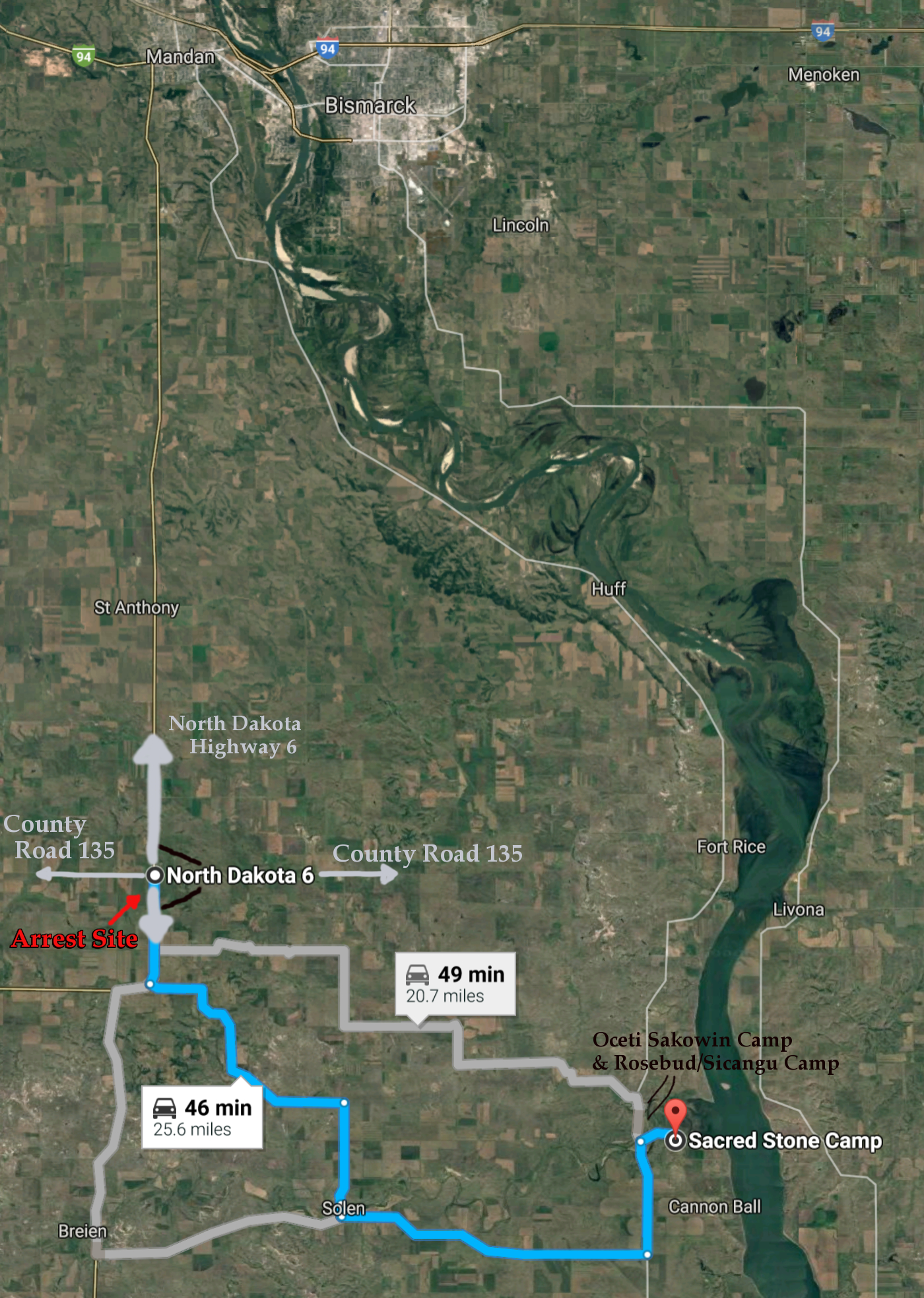 The following is an excerpt from an article published by Bismarck Tribune on Oct 15, 2016 at 8:18 p.m.: called “14 arrested during another day of pipeline protests” by Jessica Holdman:

“Earlier in the day, 10 people were arrested after allegedly congregating in the middle of Highway 6 near an active construction site and refusing to leave, according to Keller.

Keller said the caravan was stopped by police at the intersection of the highway and County Road 135 around 9 a.m., about two miles south of where crews are actively running pipe — the same place a large protest took place Monday.

The group got out of their cars along the road, and some refused to leave on orders from police, Keller said. They are facing charges of disobedience of a public safety order during riot conditions and disorderly conduct…

Highway 6 was temporarily closed to traffic from St. Anthony to County Road 135, and local residents were advised to stay off of the road.”

Below includes evidence which proves that everyone arrested on October 15th was under false pretenses.

Note:  All evidence indicated by the term “Discovery“ was given to Ms. Wilson by The State Attorney’s Office on Friday, 5-5-2017 by employee Shannon Eagon in response to her Request for Discovery.  Ms. Wilson was sent a “STATE’S DISCOVERY RESPONSE and REQUEST and NOTICE OF INTENT (N.D.R.Evid. 707); the notice was sent to her at 141 Lansdale Ave., Fairfax California on 3-21-2017.

Video shows line of vehicles driving northbound on Highway 6. Several North Dakota & local government officials are blocking the right-of-way, which causes civilians to pull over to the side of the road.

John Wathen narrates while filming: “Alright. We’re rolling up on the site, & it looks like the police have got the road barricaded. They’re not going to let us in. I”m not exactly sure what’s going to happen here, but here we go. They got the tank out in the road. I don’t know if anybody can see this.”

Video by John Wathen shows civilians now out of their vehicles in front of the officers who are blocking the road, pleaing to them let them move north.    Traditional singing & drumming heard in background.

Civilian: “This ain’t no power struggle. We’re just trying to exercise our rights, so let us through. They’re public roads. Our taxes are what pay for these roads and your paychecks…. Why can’t you guys be bigger men & put your gear down & do what’s right morally? There will be cops who turn their badges in because they know this ain’t right.”

Civilian’s voice:  “We’re here for YOU. We’re here to save the water for future generations.”

Another Civilian:  “What happened to ya’lls Oath?  Do you guys just not think about the Oath you gave?  I can tell you’re thinking about it, man.  THE OATH! What happened to it?”

Officers forming a straight line while one places orange cones on the ground.  Traditional songs & drumming heard in background.

Civilian:  “We ain’t doing this for chaos.  We can see ya’ll’s faces.  Ya’ll don’t like this.  Where’s your morals?  Think about it.  Do you want your kids to be raised in a country like this where they think its okay– buy ya’ll keep letting it happen.”

Officer on megaphone:  “Everyone in the crowd needs to back up….”

Traditional singing & drumming heard in background.  An officer reaches toward one of the civilians.

Another civilian steps between them, & states:  “You cannot put hands on him.  You can’t touch him.”

Another officer:  “Don’t get any closer.”

Civilian:  “I don’t see why we have to have such a big fight over WATER…”

Another civilian:  “We have First Amendment Rights.  Time to start protecting your people.”

Another civilian:  “What’s going to happen when that pipeline breaks?  What water are your daughters & sons going to drink? How much money they going to have to pay for clean water?  Ten dollars? Twenty dollars?”

Another civilian:  “You guys don’t make that much.”

Another civilian:  “You’re violating our civil rights over what belongs to us!“

Civilian:  “Think about it– First Amendment Rights!  We have the RIGHT to peaceful (muddled).  We have the right to pray!  Who are you protecting now!?”

According to North Dakota Century Code Chapter 29-06-20 (1), “A private person may arrest another for a public offense committed or attempted in the arresting person’s presence.”

According to North Dakota Century Code 29-06-18, “An officer may take before a magistrate a person who, while engaged in a breach of the peace, is arrested by a bystander and delivered to the officer.”

Furthermore , according to North Dakota Century Code 29-06-21 (1), “A private person making an arrest must inform the person to be arrested of the intention to arrest the person, and of the cause of the arrest, unless:

1.  The person to be arrested then is engaged in the commission of an offense.”

In addition, according to North Dakota Century Code 29-06-23, “A private person who has arrested another for the commission of a public offense, without unnecessary delay, shall take the person before a magistrate or deliver the person to a peace officer.”

Alex “Distance” Wilson:  I have a right to make a Citizen’s Arrest.  I’m witnessing United States Code Title 42 Conspiracy to Interfere with Civil Rights occurring.  I could get tried with Action for Neglect to Prevent if I don’t report this crime, & so could you, & I don’t want you guys (indicates to officers) to get falsely charged.  I don’t want these guys to get falsely charged (indicates to civilians).  I need to speak to the highest ranking officer right now so I can let them know which statutes I’m referring to so we can make the arrests.  This is being recorded.  I need help.  I need help.  We are in distress.  Who can I speak to so we can get the arrests on these men?  I will take it to court myself going pro se civil litigation…. I’m not in violation of the law, but I’m witnessing a crime, & it would be irresponsible of me as a witness to not create this Citizen’s Arrest right now, & I have a right.  I reserve that Right right now.  Will any of you honor my Right to do a Citizen’s Arrest?  I require to speak to the highest ranking officer here…”

Transcripts and legal analysis of the following two videos I filmed, are available within pages 18-45 of the Claim:

Part one evidences myself being ignored while asking several officers for their names & badge numbers, & also while trying to speak one on one with an officer in order to show to them the above research which proves DAPL was illegally approved, & by what means:

Part 2 from above video, about a minute later:  Militarized police continue blocking the road. The citizen’s arrest is announced again to other officers. Request for badge numbers is ignored.

The following video compilation was compiled by John Wathen, & broadcast on 10/16/16 along with the following firsthand testimony.  Excerpt from Mr. Wathen‘s witness testimony:

“I witnessed the violation of 1st Amendment rights of around 50 people on Hwy 6 Morton Co SD.  We gathered where police were obstructing a public highway.  We were stopped before any crime or action had occurred. They blocked the road and told us we were obstructing a public roadway so we moved into the grass where several people were arrested AFTER complying with the order to get out of the road.

One singer was arrested and his ceremonial drum confiscated.  The police used it as extortion by refusing to give it back to tribal people there until we agreed to leave.  They returned it and we left as promised but the damage to the 1st Amendment was already done.”

Further video of the impasse, as a small number of Protector’s stand in peace and prayer. Leaders tell Protector’s to step off the road. Police continue standing in the road.  Dispersal warning is given although the road is no longer blocked by Protectors. People who are not in the road are illegally arrested.

Protectors are no longer in the road and are being warned to disperse, although they are not violating the law. Police continue blocking the public road. More illegal arrests are made.

Photo of the man acting as Commanding Officer, whom Distance Evereheart Declared a Citizen’s Arrest upon within the above video: 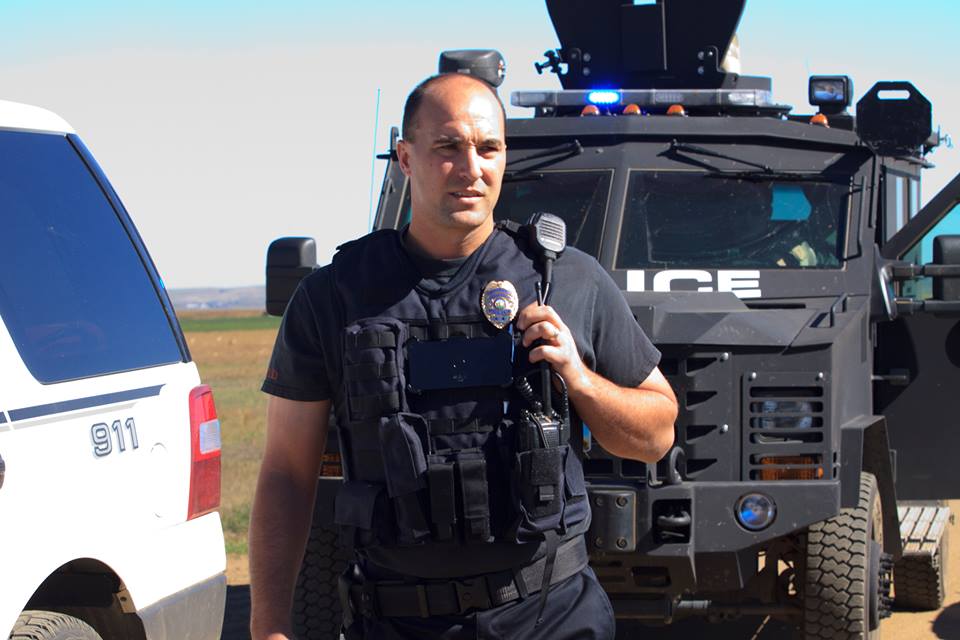 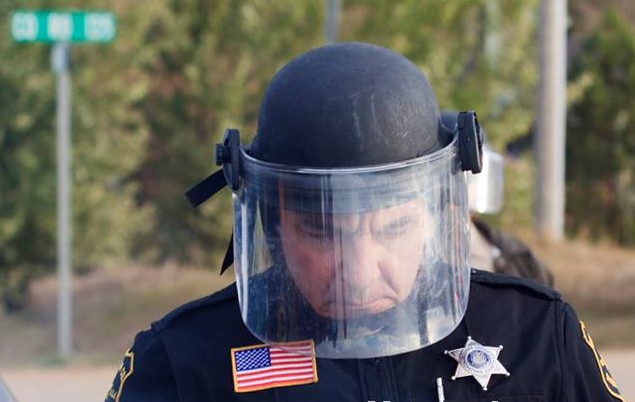 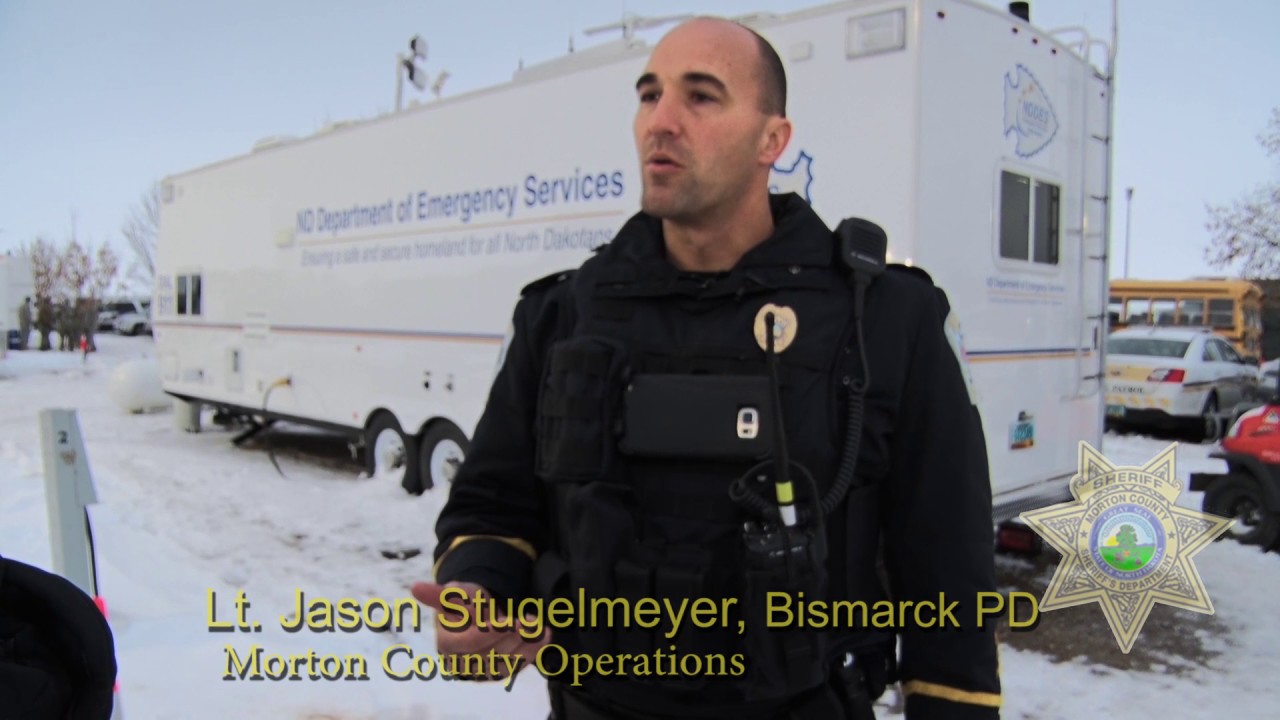 Above photo uploaded by “Morton County North Dakota on Jan 20, 2017- from video: “Lt. Jason Stugelmeyer explains why officers working the DAPL Protest wear protective gear to shield themselves from violent outbreaks from protesters“.